I had a great time at the South Carolina Book Festival this past weekend. My husband and two friends of ours joined us, so we made a little weekend away out of it.

Saturday we wandered through the exhibitors hall and bought a few books, and got to meet author Faith Hunter. My husband's is a fan of hers, so he had a lot of fun talking with her. She was gracious and sweet and even gave out free jewelry with every book purchase. I got a pair of beautiful blue and purple stone earnings, my husband got the first book of her new series. And we hooked our friend on her current series. (and we got cool buttons that said "Have Stakes Will Travel")

Later that day I spoke at the YA panel with authors Gigi Amateau andLinda Beatrice Brown. It was a good panel since we're three very different authors in both stories and voice, so it interesting to see how we approached writing and storytelling. I'd already read Gigi's book, and I picked up Linda's book, Black Angels, a Civil War historical about three children walking from North Carolina to Virginia after their plantation is burned. Moderator Jane Zenger asked some great questions and kept the panel rolling. (And my husband was sweet enough to sit in the back so he wouldn't make me nervous) 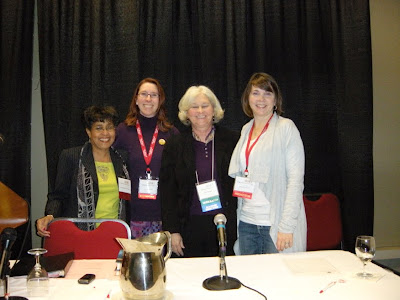 L-R: Linda, me, Jane, and Gigi
We got to mingle with the other authors Saturday night at dinner, and then on to Sunday.

We didn't realize the Sunday panels started at 11:30 and not 10am like Saturday, so we were there way early and the convention center was closed. Our friend Rich suggested walking over to the local bookstore to kill time, so we happily agreed to follow. Little did we know it was 37 miles away, in 10 degree temperate, uphill both ways. (Okay, I'm exaggerating, it was more like six blocks and 43 degrees, but it was up hills and it was cold). When we got there, it turned out his phone had lied to us and there was no bookstore in sight, even though Google maps swore there was.

Me and my feet were not pleased.

Well, we couldn't exactly stand there shivering, so we hiked back to the convention center, ears frozen, noses dripping. By then the festival was open and they were selling coffee and tea, which we descended upon like attack piranhas. To punish Rich, we checked him into the coat check area until we forgave him. Best dollar we spent all weekend. 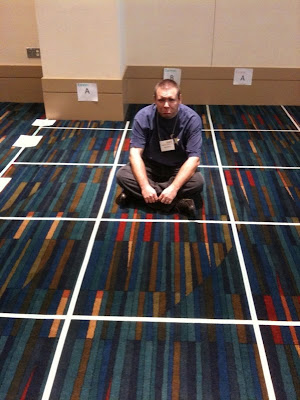 Rich in Time Out
Once we thawed, I had the second panel of the weekend, Science Fiction vs Fantasy: What's the Difference? with James O'Neal. This was another fun panel, even though moderator Curtis Rogers was a sci fi fan and I was outnumbered 2-1. But I held my own and represented fantasy admirably. I accidentally left my camera in the car, so I didn't get pictures of this one.

It turns out James is a regular at a mystery writers' conference called Sleuthfest, (he also writes crime novels under the name James O. Born) which happened to be the same weekend. A good friend of mine was at Sleuthfest, and she knows James, and wondered why he wasn't there this year. How funny that he was on a panel with me! Small world, huh?

Overall, the weekend was fun and I sold out of books the first day (yay!). It was a much quieter ride home since we were all exhausted (and my feet hurt), but I've recovered now.

I did read a great book while I was there, and I'll talk about that tomorrow with this week's Book Challenge Update.
Posted by Janice Hardy at 9:01 AM