And the Winner is...

It was a tough choice at the end, as I got some really funny (and really bad) chicken jokes. Of course, I love bad jokes, so even the really bad ones were really funny. As luck would have it, I got some ARCs for The Pain Merchants last week, so I'm picking two winners -- one for the US and the UK edition -- and two runner's up, who will get The Shifter T-shirts.

From Krista Ashe
Why did the chicken cross the basketball court?
He heard the referee calling fowls

From CommaSplice
A kindergarten teacher was telling her class the story of Chicken Little.

One little girl raised her hand. "I bet he said 'Holy Cow! A talking chicken!'"

*Note: edited for my younger readers

From Reggie Writes
Q. Why Couldn't The Chicken Find Her Eggs?
A. Because She Mislaid Them.

From Kat Bryan
A pair of chickens walk up to the circulation desk at a public library and say, 'Buk Buk BUK.' The librarian decides that the chickens desire three books, and gives it to them...and the chickens leave shortly thereafter. Around midday, the two chickens return to the circulation desk quite vexed and say,' Buk Buk BuKKOOK!' The librarian decides that the chickens desire another three books and gives it to them. The chickens leave as before. The two chickens return to the library in the early afternoon, approach the librarian, looking very annoyed and say, 'Buk Buk Buk Buk Bukkooook!' The librarian is now a little suspicious of these chickens. She gives them what they request, and decides to follow them. She followed them out of the library, out of the town, and to a park. At this point, she hid behind a tree, not wanting to be seen. She saw the two chickens throwing the books at a frog in a pond, to which the frog was saying, "Rrredit Rrredit Rrredit..."

Q: Why do chicken coops have two doors?
A: Because if they had four door, they'd be a chicken sedan.

Winners, send me your e-mail addresses so I can contact you about mailing your prizes out. I'll keep the comments private if you want to post them, or you can just e-mail me through the website. If you have a preference on the US or UK version, just let me know. (I know some folks like one title over the other, but the story is the same). And since they'll be signed, if there's anything in particular you want me to write, let me know. I guess that goes for the T-shirt winners too if they want! There's got to be a permanent marker around here somewhere. (If you don't mention wanting them signed I'll just send them as is)

Congratulations to the winners!

I'll do two more contests before the book comes out on October 6, so you still have chances to win a signed ARC. Keep an eye out for the next one in about two weeks. I"ll be doing that one on The Other Side of the Story blog for my writer readers, so that contest will be related to that blog in a fun and silly way. (and regular readers there can already guess what it's going to be!)

Thanks to all who entered and made the last week filled with laughter.
Posted by Janice Hardy at 3:39 PM 6 comments:

Today is the last day to enter your chicken jokes to win a signed ARC of The Shifter. Or one of The Pain Merchants if you prefer, as I just got a stack of those from my UK editor. (saying that never gets old).

Just to recap, to enter, simply post your best chicken joke in the comments section. (In any of the chicken context posts). Comments are private right now, so you won't see it appear, but I'll get them. If you have any troubles, you can always e-mail me the joke. Just go to my website and click on the e-mail link at the top of the page. Either way works.
Posted by Janice Hardy at 7:48 AM No comments:

I've heard from a few folks that they've been having trouble logging into the comments section to enter the contest. So if you happen to have had this problem, you can always e-mail me the joke. Just go to my website and click on the e-mail link at the top of the page.

I'm still getting jokes daily, so I know the site is working, but I'm not sure why some can't post.

Ah, technology.
Posted by Janice Hardy at 8:16 AM No comments:

Okay, the first official The Shifter contest is here! (cue the dancing chickens) 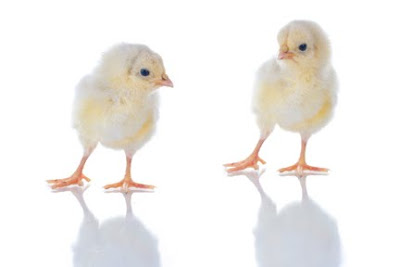 If you've been to my website, you've noticed I love chickens. I can't say why, I just find them hysterically adorable. So for the next ten days, send me your very best chicken jokes. The joke that makes me snarf something out my nose from laughing so hard wins a signed ARC (advance reading copy) of The Shifter.

To enter, just post in the comments section. While this contest in underway, I'll have moderation turned on so I can screen what comes in. So if you post something non-joke related, it won't post immediately like usual. I'll approve all comments and let through the ones that aren't for the contest. You have until August 23rd to enter.

On August 24, 2009, I'll post the winner, and maybe a few runner's up if we get some great jokes. I'll round up something fun as prizes for those. I think I have some Shifter T-shirts that are fun around here somewhere.

While "why did the chicken cross the road?" jokes are likely going to be popular, I've heard a lot of them, so be warned that you might have to dig a little deeper to find the funny with those. I'm not saying it can't be done, just that those might be tougher to achieve full snarfability.

Who can enter: Everyone.

How many times can you enter: One entry per person, please.

How do you get your prize: Winners will need to send me their address so I can ship them their book.

May the best joke win.

EDIT: I've just be informed that someone was having trouble logging into the comments section. So if you happen to have had this problem, you can always e-mail me the joke. Just go to my website and click on the e-mail link at the top of the page.
Posted by Janice Hardy at 8:09 AM 22 comments:

It's been pretty quiet this week. Shifter 2 is off to my editor, and since I know I'll be diving in head first to some heavy revisions soon, I figured now was a good time to take a break and let the old brain juice refuel.

This has let me catch up on stuff I've been meaning to do, like finalize everything for my first official contest (check back tomorrow!) and get some business cards and bookmarks done. It's also let me dig into the stack of books that's been growing on my shelf.

I buy a lot of books. Actually, make that A LOT of books. When I hit 20 on my To Read shelf, I stop until I get back to single digits, then go shopping again. There's always something I've been dying to read (Right now it's Sacred Scar by Kathleen Duey, and all the bookstores near me are SOLD OUT!!!) so I can't go into a bookstore without walking out with an armful. Sometimes I jump ahead in the list, but I try really hard to read the next up in the stack.

Currently, it's The Book Thief, which is pretty funky so far. Very interesting writing style and narrator. It's more literary than I usually read, but I like to broaden my scope every now and then.

Weird Things I Never Thought I'd Have to Worry About

I gave a copy of The Shifter to a friend of mine for her birthday. She's a huge reader and was dying to have her very own ARC (advanced reader copy), so I was happy to give her one. But then she asked me to sign it.

I've never had anyone ask me to sign anything that wasn't a yearbook or a legal document. I had no clue what to write. What's worse, my family lovingly teases me that with my handwriting, I should have been a doctor, so my signature isn't even very pretty.

I stared at her like a deer in headlights, my mind blank as the page, and then we laughed about it. In the end I wrote, "To my friend, Amy, happy birthday" but it did start me thinking.

I'm going to run into this again at some point.

No one warns you about this part of being a writer. There should really be a memo.
Posted by Janice Hardy at 11:11 AM 4 comments:

My husband is the cook in our house, and since we had a friend of ours staying with us the past few days (hi Ann!), he did his uber-hubby thing and pampered us like spoiled little girls. Last night, he made his extra yummy chicken parmesan and pasta, but it was his hors d'oeuvres that wowed us.

Picture this...Artichoke hearts, Gorgonzola cheese, and scallions, all whipped up into a delicious dip and plopped down on these puffy little crackers he made.

The were so good.

The crackers just melted in your mouth like crisp little wafers. The artichoke had the perfect tang, and the cheese just smoothed it all over. My mouth is watering just writing this post.

I could have eaten an entire kitchen full of them. I may have to find a way to convince him to make these every single night. If it's possible to live off these things, I might attempt it.

I'm so glad we have more friends coming over for dinner Friday night.
Posted by Janice Hardy at 5:12 PM 2 comments: