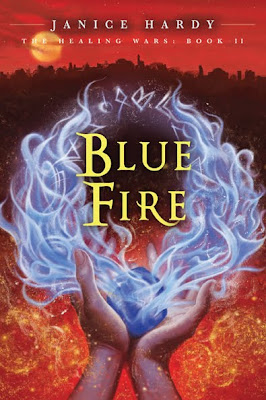 For those in the Georgia area (or who will be in the area at the time, or are looking for an excuse to visit the Atlanta area--road trip anyone?), I'm having a weekend launch party for the release of Blue Fire. It starts Friday night, then continues on Saturday.

Food, fun, and prizes! Part party, part book signing, hang out with me and other folks who love books.

Come to one, come to both (they're different in nature), but stop by if you can!
Posted by Janice Hardy at 4:03 PM No comments:

The Paperback Version of The Shifter is Out

And it dawned on me I forgot to post that here! My bad. I blame finalizing Shifter 3. 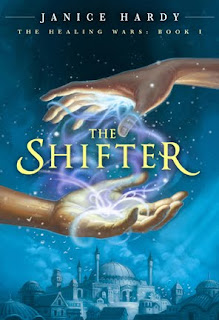 Sister. Healer. Deadly Weapon.
Nya has a secret she must never share.
A gift she must never use.
A world she must never question.
And a sister whose life depends on her doing all three.
Fifteen-year-old Nya is an orphan struggling for survival in a city crippled by war. She is also a Taker—with her touch, she can heal injuries, pulling pain from another person and storing it inside her own body. But unlike her sister Tali and the other Takers who become Healer’s League apprentices, Nya’s skill is flawed: she can’t push that pain into pynvium, the enchanted metal used to store it. All she can do is shift it from person to person, a dangerous skill that she must keep hidden from forces occupying her city. If discovered, she’d be used as a human weapon against her own people.
Rumors of another war make Nya’s life harder, forcing her to take desperate risks just to find work and food. She pushes her luck too far and exposes her secret to a pain merchant eager to use her shifting ability for his own sinister purpose. At first, Nya refuses, but faced with some difficult choices. As her father used to say, principles are a bargain at any price, but how many will Nya have to sell to get Tali back alive?

You can get it here:
HarperCollins
Barnes & Noble
Amazon
Borders
Indie Bound


And if ya happen to need some blog filler this week, feel free to copy this post and share! (grin)
Posted by Janice Hardy at 3:37 PM 1 comment:

I have my very own game now.

Okies, in all seriousness, this is kinda cool. HarperCollins has an Awesome Adventures site where they've done games for a lot of their titles, and quizzes and stuff.I just might lose the rest of my afternoon here.

As a gamer girl myself, I'm jazzed to be part of the geekdom.
Posted by Janice Hardy at 1:35 PM No comments: