I just noticed that several folks left some nice comments and I never realized it. (Sorry all!) Apparently, I didn't set something right and my e-mail wasn't letting me know I had posts. I do try to respond so you guys know I'm not ignoring you or anything :) I do love hearing from ya'll.
Posted by Janice Hardy at 11:26 AM No comments:

My office is on the second floor, above the garage. It's a great office, with lots of room and big windows. My front windows look out over the street leading up to the house, which is nice since I can keep an eye out for deliveries.

Right now, there's something HUGE with lots of legs stuck to that window. I think it might be this: 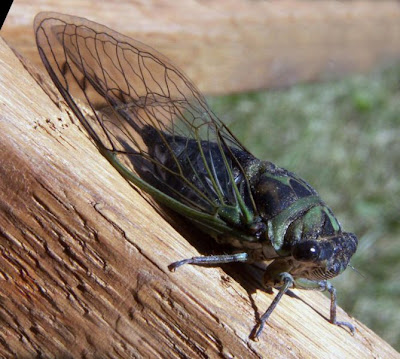 I'm not the most squeamish person, but that's one creepy little bugger. I'm really glad it's too hot to have the windows open today. Cause that thing might be capable of chewing through the screens to come get me.

So if you see a giant, multi-legged winged monster in a future book of mine, you'll know where it came from.
Posted by Janice Hardy at 4:17 PM No comments:

So this morning just before 6am, I'm rudely awakened by a stuffed fox thumping me in the nose. This was quickly followed by 10 pounds of exuberant year-old cat pouncing on my chest. I responded by screaming "Ugh!" then "Puck!" in a sleepy and whiny tone. My husband grunted and rolled over, oblivious to the attack.

Puck really loves his fox. And his favorite way of playing with it, is to grab it by its tail and fling it as high as he can, then leap for it with every ounce of his furry little body. Usually, this evokes responses like:

"Man, he got some good height on that one."

"At least he missed the lamp."

At 5:46am, all he gets are screams. Not that he cares. He just grabs the fox by the tail and flings it out the bedroom door. I've gotten really good at ignoring the sounds of things falling over.

Email ThisBlogThis!Share to TwitterShare to FacebookShare to Pinterest
Labels: cats

Coming to a Bookstore Near You (If You Live in Georgia)

I got my first ever book signings this week! (yay!) So if you happen to be in the North Georgia area in October, come by for a visit.

A Gathering of Librarians

Librarians all over are gearing up for this weekend's ALA Conference. (The American Library Association). While I won't be there myself, The Shifter will be, and my wonderful publisher Balzer & Bray is featuring the book at the HarperCollins Childrens booth, and at the fiction breakfast. So if you happen to be in Chicago and attending, stop by and say hello. Tell them Janice sent you. (And it'll be so cool if my editor actually tells me someone said that)

And if you happen to see cool Shifter stuff while there, take a photo and send it my way. I get so excited when I see those things.

Wish I could be there, but alas, maybe next year.
Posted by Janice Hardy at 12:21 PM 3 comments:

Email ThisBlogThis!Share to TwitterShare to FacebookShare to Pinterest
Labels: news and events

As promised, the The Pain Merchants cover.

And here's the full jacket all spread out. (They took that back cover copy from my website! For some weird reason I find that really cool.)

As I mentioned last week, the cover process for the UK version went a little differently than the US one. I wasn't included, except for one tiny little detail. My lovely UK editor said the design team wanted to do something iconic, and asked if the Healer's League had a logo. I said no, but told her I could whip something up if she'd like.

I gave her five simple black and white logo designs. Nothing fancy, as I knew her art department would work their magic and make it look all nifty cool. For funsies, here they are:

It's easy to see which one they went with, and how the others influenced their final design. They took this basic line art and turned it into a gold and enameled-looking image. To make the cover fit the story, I added a line that described the Healer's League pin into the story.

The two covers have a lot of similarities, such as the idea of the hands, the swirly stars and the blue (which is the color of the magic metal, pynvium, in the book). But they're also quite different. The Pain Merchants has an edgier look, and I love how the font style captures the Byzantine feel I based the architecture of the world on. You see some of that in The Shifter cover with the city along the bottom. I think they're both great, though my husband likes the UK version better--I wonder if he's secretly British?

Here they are side by side for easy comparison:

I find it fascinating how the same story is represented in two different cultures.

For another look at covers across the pond, my agent did a post a while back.
Posted by Janice Hardy at 7:47 AM No comments: