Whew, good to be home and back in my routine. It's been a crazy month, but I did have a lot of fun in between the craziness. (and the coughing)

I got to visit a couple of schools (go Liberty and Lakeside Middles!) and a bookfair at Barnes & Noble with the Liberty Middle folks. This was my first bookfair and I had a great time. The organizer, Sharon, (that's her in the red stripes) was awesome and took great care of me and the book. And of course, my hubby was there to fetch me hot tea and take pictures. 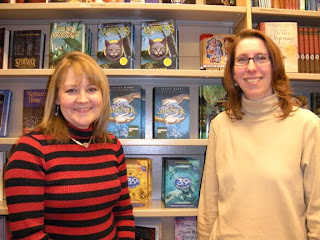 The school visits were as fabulous as ever. I just love coming out to talk to folks. They ask the coolest questions, and even give me ideas for the books. I've got a bunch more next year and I can't wait. (School visits, not ideas, but I have those, too I guess)

Lots of friends saw the book on the shelves while Christmas shopping, so have a new set of "Shifter on the Shelves" photos or my growing collection. I'm still not sure exactly what I'm going to do with them, but I'm determined to find something creative. I'm thinking a cool poster of some type.

Oh! Did I tell you that Shifter 2 is done? It is! (major happy dance) It's in the Land of the Copy Editors right now, and I'll see it again for edits come January, but it's finally finished. It was tough, but the end result turned out pretty cool, so I hope everyone will be happy with it. (Though my friend Dee Dee insists I'm too mean to Nya, bwahaha)

More later!
Posted by Janice Hardy at 7:01 AM No comments:

Really, I Didn't Fall of the Face of the Earth

Though you'd think I did from my terribly long absence. Sorry all!

I have a good excuse, really. I was hard at work on Shifter 2, (which is done, yay!), then there was Thanksgiving, and then I got sick for two whole weeks! Then there was Christmas, and I went away for a much needed vacation after all those deadlines and being sick and all. 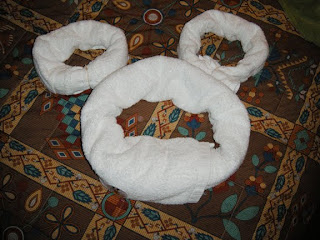 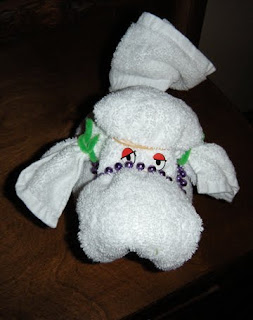 We stayed at the Wilderness Lodge, and had a very talented towel artist taking care of our room. Not only did that Mickey Ears greet us when we got there, but the next day, we found this cutie. And even a fun fan thing that held our toothbrushes in the bathroom. (I didn't take a photo of that though)

We had a great time, and now I have the urge to watch the movies for every ride I went on. So I sense a big lazy movie day in my future. But since I'm not starting on Shifter 3 until January, I can veg out for a while longer.

I did find the most amazing store ever though. In Downtown Disney, there's a store called Little Miss Match, that sells the funkiest socks. (Did I ever tell ya'll I adore funky socks?) They come in "pairs" of three, and are different patterns that go together, even though they don't officially match. You can wear the blue and yellow and green stripes with the pink and blue and green stripes one day, then the orange and green and blue stripes another. They rock. There's even TOE SOCKS! 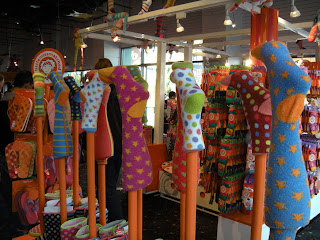 Did I go crazy? Oh yeah. I need at least an extra sock drawer now, if not two.

As soon as I get unpacked and squared away I'll update everyone on the fun things I've been doing and the great bookstores and schools I've visited (in between being sick and being a world traveler and all). And maybe even a sneak peek or two at some of Shifter 2. We have a title now, so hopefully soon I'll have a cover as well to show everyone.
Posted by Janice Hardy at 9:19 AM 3 comments: